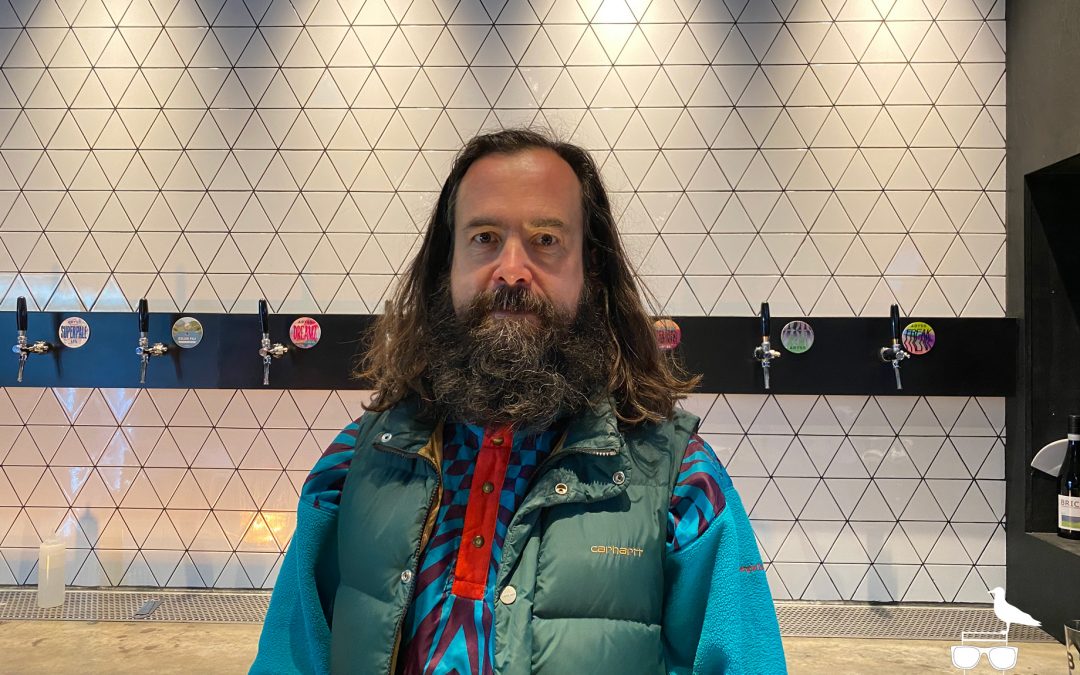 The Abyss never looked so good

After crowdfunding its way to £30k during lockdown, ABYSS Brewing finally launched its Lewes brewery + tap space in late autumn

So on a chilly December afternoon I met up with Andy Bridge, co-founder of ABYSS, and between sips of their Super Pale and bites of a burrito I threw some questions at him

We chat about the new brewery taproom space, get behind the name and psychedelic can art, and discover hints of a future Harvey’s collaboration…​ 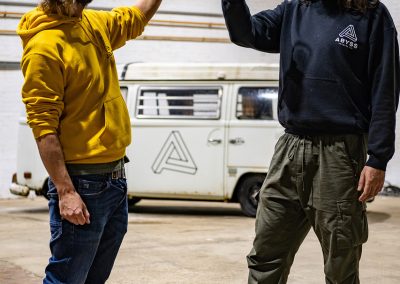 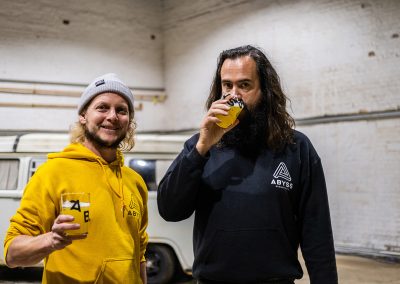 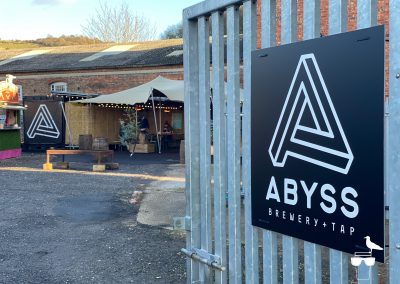 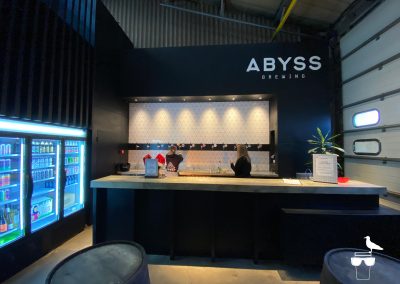 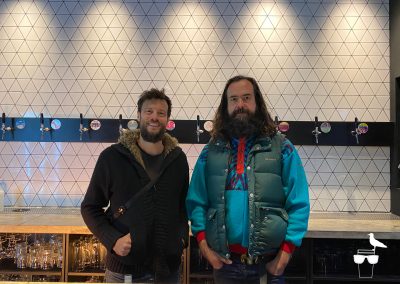 I meet Andy Bridge at the modern new taproom

So Andy, take us back to your beginnings. You used to brew in the cellar of the Pelham Arms and sell your beers topside in the bar. Tell us that origin story…

It began with me and my friend Andrew, who I met at art college 25 years ago. He leases the Pelham Arms, and has built it up as a really good foodie pub; but he was always frustrated by the beer offer because it was tied to Hall & Woodhouse.

Yeah, a great family brewer from Dorset, but limited in its scope – more a traditional multi-ale. Andrew and I were obsessed with the new wave of brews like Jaipur and Punk IPA, they were really exciting for us at the time.

We did think a lot of it was over carbonated though, so from the start we were obsessed with softer mouth feel, flavoursome beers with low carbonation. Essentially we started emulating cask in a way, but practically could only do keg in the cellar of The Pelham – a 16th-century coach-house with ceilings 4” high. (laughter)

On the original kit we’d make two kegs for each brew, 100 pints. And to their credit, Hall & Woodhouse – for the first time ever – let us have a tap in one of their managed houses.

It had minimal branding. We’d experiment with different beers. Cinco was really popular back then, a 5% pale using a tiny bit of Sorachi Ace, which gave our beers something else. Tropical Thunder was brewed then as well; it became a bit of a cult, and it’s still available now.

We were getting instant feedback from the bar – the locals were getting into it and following each brew. Not long after that, a brewery came up for sale – the old Black Cat brewery. So we took over the Black Cat’s space and real ale kit, and on cask conditioning with our kegs. It was only about two years ago that we started carbonating our beer in the modern method.

Over time we’ve organically grown larger and larger and replaced our tanks. It was only five years ago that the ABYSS company started, though we’ve been brewing longer.

Where did this passion for brewing come from and have you just learned from trial and error as you went?

Andrew did a brewing course – he’s got the chef background and so is very intuitive with flavour – but it was just a passion for great beer really.
We’ve never thrown much beer away. We made loads of beers then that we don’t make any more, like an experiment with red ale a while back.

Where did the name ABYSS come from?

ABYSS was… well pretty open ended. There’s a bit of mischief in there, you know. Don’t take it too seriously, and you can read into it what you like, which is the same with the beer. One interpretation that we liked was the Eastern interpretation, “step into the darkness and you will find the light” – i.e. take a chance in life and good things will come of it. Take a leap of faith and what will you find?

Yeah, that’s certainly a more positive spin than the Western idea of the ABYSS isn’t it!

Yeah, we like the ‘go for it, good things can happen’ spin. The tap room feels like real proof of that now. It’s great to get open and have our audience drink with us.

I have to ask about the can art – it’s psychedelic to say the least. Are you deliberately trying to make them hard to read? What’s the vibe there?

We just enjoy the vibrancy of what we can do. A can is a blank palette to experiment with. Gill, who works more in fashion and graphic design, does our designs; they aren’t exactly subtle but they’re very inclusive, and appealing to all. I guess we want them to reflect the big flavour of the beer, and the designs reflect that.

We’re quite obsessed with making beers with big personalities and mischief, like Dank Marvin or Dreamz with a Z. They grab the imagination.

Did you ever dream you’d get to this point, opening an ABYSS taproom/brewery?

I definitely dreamed it, yeah. Lockdown was a really galvanising time for us because we poured loads of beer in the Pelham, serving it twice a week in litre bottles out of the door. We met loads of our customers locally while doing deliveries, and really enjoyed that experience, being face to face, talking about the beer and becoming friends. It really gave us the feeling that we must get a taproom. We’re sociable people, and beer can really bring people together, so it was evident it was the thing to do. The idea of doing events here is really exciting to me.

So people can expect to find you behind the bar here, then? (laughter)

Yeah, usually on a Saturday afternoon. It’s really nice to keep in touch with the customers and see how it’s all working. We designed the bar ourselves and we’re always thinking of little tweaks.

I heard rumours that you were going to set up in Brighton at one point. What happened there?

We were looking at premises under Brighton Station. Negotiations went off the boil with Covid, and then an internet delivery company came in – the type that will send an avocado to your door in 15 minutes on a Sunday morning if you pay them £20 because you’re feeling lazy (laughter) – one of those came in and offered three times the rent that we’d agreed. This space came up in the meantime, but on reflection fate ran its course and this is a bigger, better site for us.

Is there still a chance you’ll have a presence in Brighton one day?

Yeah, we’d love to do more sites, each one very unique. Whatever the site is, we will play to its strengths and celebrate its uniqueness, rather than coming in and ripping it all out and doing a Brewdog-style thing.

Let’s talk about the taproom here. When I walked in my first thoughts were that it’s really modern – black-and-white contrast, geometric tiles, cocktail bar like – quite up-market.

Yes, that then (laughter). So is that what you felt worked best here in Lewes?

Well it’s just something that works within the space. This warehouse was a maltings for the Southdown Brewery over the road, so there is a big brewing connection in this building. One side of it is the tanks and the end of the old warehouse, and the other end is the contemporary bar.
Our friend Steve designed it; in a previous life he used to design bars like the Coal Shed in Brighton, but he’s also been to hundreds of taprooms in the US and keeps spreadsheets of all the IPAs he’s had. He’s our biggest fan, a great friend, and he designed the bar element with this US taproom experience in mind. There’s a room above with a view over the brewery which we’ll be able to hire out at some point.

What sort of entertainment, food and bar options will there be?

We currently have around ten taps of fresh ABYSS, so you can work your way through our range just yards from the tanks. We also have low- and no-alcohol drinks available, and cocktails from choice suppliers. This week we’ve got a Mezcal Negroni, which is massive and smokey and imported from Wuhaca by a lady in Brighton.

Food-wise we have Carlito Burrito, which is open whenever we are serving Mexican food to go with your beer. Which is currently: Thursdays 5–10, Fridays 3–10 and Saturdays 12–10.

On weekdays we’ll be opening to do more events, evenings with local producers, tastings and pairing evenings – for instance a local winemaker to come in to take about its range and do food to go with it.

We’re going to do an Argentine fire-pit grill on a Sunday – a bit of an alternative to the Sunday roast!

Then on December 18th there’s ABYSSMAS which is our charity Xmas do with makers, vintage stalls and wine makers coming down to sell their products. It will be great for last-minute Christmas gift ideas.

Having read past interviews you’ve often felt you’ve lacked the capacity you needed. Do you finally feel like you have the space you need to brew to meet demand?

The test is now really. We wheeled in four new fermenters this week, which is a total capacity of 10,000 litres – about 17,000 pints. But we haven’t been able to can enough recently, so now we should be able to split a batch and do half canned and half kegged. We don’t want to get too big though; we want to make a sustainable business which can employ some good dudes. We want to stay autonomous, make exciting decisions about beer and keep it lively.

We recently introduced a series called ‘Deep Dive, experiments from the ABYSS’. The latest one was an Oat Pale with 30% oat, which is quite a unique approach.
We also make a Pilsner called Gonzo, which we haven’t been able to make enough of, but hopefully we’ll now be able to make enough to keep it in stock.

The Lewes brewery/taproom scene seems to be really strong now, with you and Beak just down the road. Is that the feeling you get here?

Absolutely. It’s making Lewes a destination, which is really exciting. Harvey’s is here as well and Head Brewer Miles was here this morning as we’re talking about doing some things together.

So there are plans to collaborate with Harvey’s then?

Yeah, Miles has worked with Burning Sky in the past, so it’s all to play for.

That would be really exciting – a centuries-old brewery working with a very new-age brewer.

It would certainly be exciting for us. Harvey’s is cool, the beer is unique and based on great tradition.

If people want to try your beer from the tap, where can they find ABYSS in Brighton?

The Greys on Hanover Hill, The Jolly Brewer on Ditching Road, and places like Hope and Ruin, the Pond, the Brunswick and the Evening Star in town.

Finally, for anyone visiting from Brighton & Hove, do you have a favourite pub in Lewes?

The Lewes Arms is great, I had some excellent Hophead there recently. The Gardener’s Arms on Cliffe High Street as well – that’s a good stopping-off point on your way to or from ABYSS.