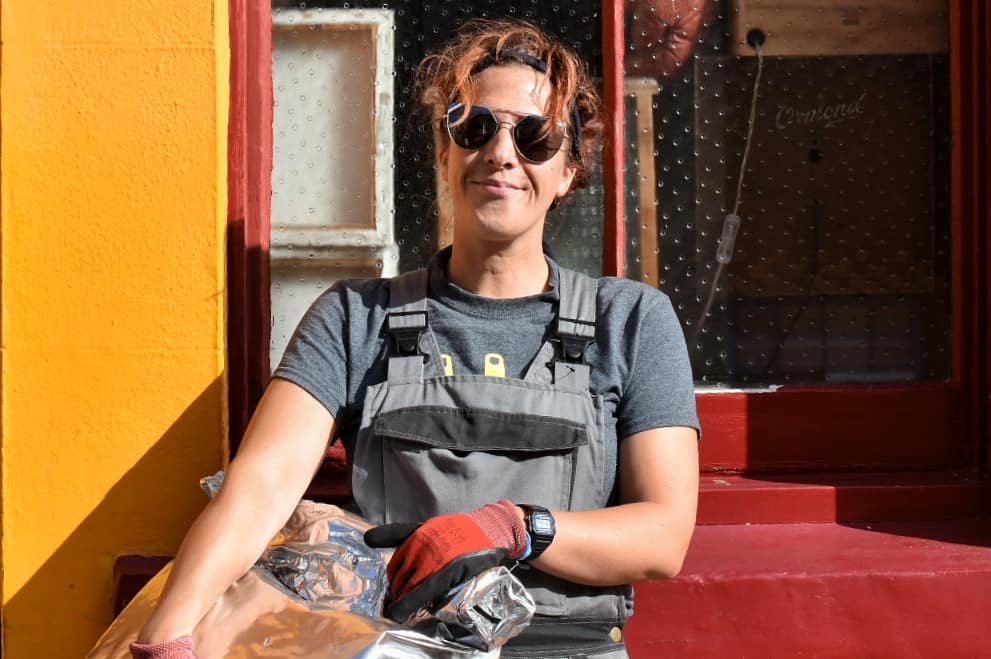 Last week Kate Hyde, production manager at Hand Brew Co., got in touch with us to ask for help sharing some posts about a little International Women’s Day brew event

Sod that we said, it sounds great, we’ll do a Q&A and you can tell everyone what’s going on, and about the collaboration beer you’re making…

Now it seems this ‘little’ International Women’s Day get-together has blown up beyond Kate’s wildest hopes, and what was just a brew day, could be the creation of an empowering Women’s beer industry network

So what made you decide to run an IWD event this year (besides the obvious)?

Ha yes, I am a woman, and this is my first year in the role of Production Manager at Hand Brew Co, and for me, being in that position felt like a real achievement to be proud of. Then last year SIBA released their craft beer report for 2020 which highlighted that while 26% of roles in the industry are taken up by women, we only make up 11% of the production and brewing side of things. Only 1 in ten.

I’ve worked in brewing for a long time and I love my job, but as the only woman on the production side here at Hand, it can feel a bit lonely. So I thought it would be nice to meet other people who share my kind of life and use this event to reach out to other women working in beer in the region.

When you do something creative next to a stranger it opens up opportunities that aren’t specifically professionally focussed, just honest, valuable and authentic connections. So we’re going to get together to brew a beer and hang out.

So is this event is aimed at women right across the industry?

Yes, any and all women, and non-binary (who identify as women), working in and making a living around beer. So brewers, directors, sales people, marketeers, business managers, drays, beertenders, cicerones, suppliers, writers, ops, logistics…   I was thinking that if I’m trying to build a network of women in beer in the local area, then to be a useful network I think it needs to have all sorts of structures and members.

I wanted to proactively focus on making sure that the women that come have a chance to mingle, mix, break out of their cliques and connect. It’s about making a women’s network, so that inside and outside of work, we have people we can turn to who think like us, live like us that we can lean on for practical, professional and emotional support. The hope is to create a local network and aim to regularly have a beer girls meet up.

So to check, guys probably shouldn’t show up then? (laughter)

Well men aren’t not invited, they are welcome, but the focus is on creating a female network, so it’s a girls party. (laughter) We’re a little bit drowned out in this industry and so it’s focussed on finding people like us who feel a little bit muted by the fact we are a minority within the industry.

What’s taking place other than brewing then?

Collab brew days can be a bit boring, because after mashing in it’s generally just a lot of standing around waiting. So I wanted to create a day that had value alongside the brew day.

As well as the brewing activity, we have workshops and activities going on all day. Kicking off with a panel discussion hosted by Jen Left, the Land lady of one of our pubs the Hand in Hand and one of the directors of the brewery. She’s talking with an award winning documentary filmmaker Daisy Asquith, a silver-smith by the name of Kitty McGilchrist who runs Pretty Ugly, and Ella Raffaella Carillo who runs Metropolis Gallery in Kemptown which looks to promote marginalised artists.

There’s loads of other things happening, at the book club meet we’re reading Mary Shelley’s Frankenstein, a literary masterpiece considered to be the first ever work of science-fiction. A creative writing and blackout poetry workshop. We have a special Yoga workshop and clinic focussed on back health. There’s a soap making workshop. Momma Cherri is bringing her food van. Lots and lots of things…

You know what, I’ve somehow got about 75 people coming.. (laughter) I don’t actually know a lot of people, I was researching, looking for organisations employing ladies and emailing loads about the event, and people have just been so supportive. I’ve even got 2 ladies coming all the way from the Isle of White, they started the first entirely craft beer bar on the island in Sandown, a place that’s really quite run down now, and they are working with local artists and companies to regenerate the town.

I have got the wife of the original landlord of the Hand Brew pub in Kemptown. We have people coming from bottle shops and bars and breweries like Abyss, Arundel, Brolly Brewing, Dark Star/Asahi, Laine, Bedlam and Beak. Claudia from Burning Sky has been really helpful with chatting about the beer recipe.

yeah tell us about that, have you decided what beer you are going to brew?

Yesss. I was looking forward to that question (laughter). We’re going to do a Hopfenweisse, a dry hopped German wheat beer with a touch of bitterness for balance. We’re probably going to be coming out at 5.5%, something you can happily enjoy a pint of, but strong enough that when you see it in the bottle shop, it’s something special you want to spend your money on.

Yakima Chief in America bring out a special International Women’s Day hop blend each year and we’ll be using that. This year it’s Idaho Gem, HBC 630, Talus, Triumph and Loral. They are very fruity, tasting notes include candy, cherry and tropical fruit.

Sounds delish, how far and wide will this be available?

It will go out in cans and kegs, so will be available in bottle shops and bars. Bar trade pre-orders are available now – and recommended (contact rufus@handbrewco.com) and the public will be able to order it direct from the Hand Brew Co website and from the Hand Brew Co venues from April the 2. We’ll be holding a launch event at the tap room on the 2nd, our social media is the best way to find out more about that.

Plus, Beer No Evil in Worthing are doing an IWD beer tasting evening on April 5th which me and the beer will be at and we’ll do a guided tasting of our beer plus some other IWD beer creations as well.

and does this beer have a name?

We haven’t actually chosen a name yet. We’ve had a digital suggestion box running for a couple of weeks now so the plan for the name is to pick out a short list and have the attendees on the day vote on it. A personal favourite (that unfortunately probably won’t make the cut) is Public Cervix Announcement – I have no idea who put it in, but it makes me chuckle.

Haha brilliant, and I understand this is all a not for profit endeavour isn’t it?

Yeah, so a profit share of keg sales will go to Common Ground a local charity working with refugees. As a food growing project they offer a space where our local migrant/refugee community can come and cook, all produce is then donated to food banks and distributed among refugees in Brighton.

Then a profit share of can sales is going to go to Strut Safe – an Edinburgh based organisation staffed by volunteers that provides a ‘walk home on the phone’ service for people walking home alone at night. They were inspired by the tragic events surrounding Sarah Everard last year, and the service essentially talks you to your door in safety.

If anyone is keen to be involved who should they contact?

I’m excited to say that we’ve actually reached capacity on this event now, but I’m happy to hear from people who’d like to be put on a waiting list, to hear more about getting hold of the beer, or be added to a more general network bringing together women in beer across the South for future events and meet ups.

My email is best way for anyone to get in touch kate@handbrewco.com.