How Low/No can you go? 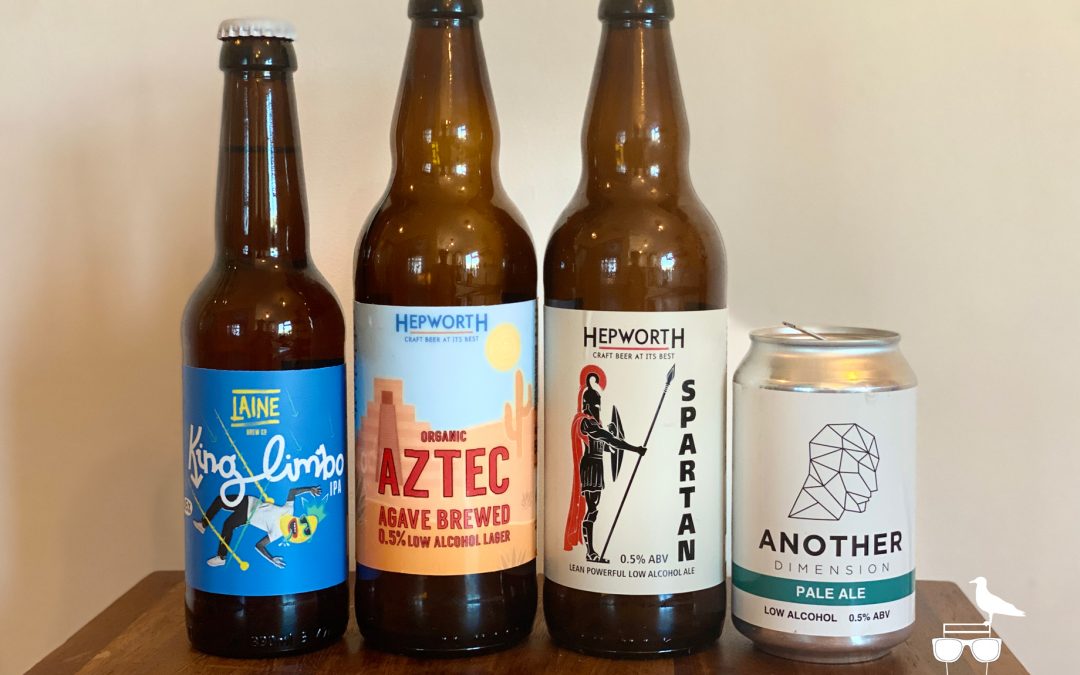 Younger generations are leading a trend towards healthier moderate drinking, and collaborative public health campaigns such as Dry January and Go Sober for October are mainstreaming teetotalism for all demographics

It’s not surprising then that sales of low/no abv beer are rising, and brewers are adding these products to their range

We speak to 3 Sussex brewers, Another Dimension, Laine and Hepworth to get their take on the market, their low/no products and how they are making low/no alcohol beer taste good

How large is the market for low/no alcohol beer?

Globally, the market is worth around $18bn and is expected to grow at 7.5% per annum, reaching around $25bn by 2024. The UK market for low/no alcohol beer is growing rapidly.
Sales for no and low alcohol options including beer were worth £60m to the pub trade in 2019, a near 50% increase from the previous year, and supermarket sales put the market
value at around £120m.

As the impact of the pandemic unfolds, overall alcohol volume consumption in the UK is now expected to decline by 10% in 2020, according to the IWSR. Most major categories will post volume losses, including beer, vodka, gin, and blended Scotch, it predicts. But the low- and no-alcohol market is expected to buck the trend, continuing its volume growth by a projected 22% in the UK from 2019 to 2024 (which includes low/no beer, wine, cider, RTDs, and spirits).

Around 4.2m UK consumers try to stick to alcohol free drinks during Dry January, which would normally see five million low and no alcohol beer pints sold. Growing numbers also
do SoberSpring, DryJuly and SoberOctober, with named periods of abstention and reduction becoming more widely publicised and helping people moderate. A 2015 study showed the number of people aged 16-24 in the UK that don’t drink had risen to 30%, an increase of over 10% since 2005.

Who purchases your beers?

Initially it was people that are really into their craft non alcoholic beers. They used to drink higher ABV craft beer but have either cut down their consumption over the years or stopped drinking alcohol completely, for a range of reasons including health & wellbeing or becoming parents.

Some might do weekly abstentions such as ‘NoLowMonday’ and seek out fresh AF beers. Latterly I have sold an increasing amount to younger adults that want a cool brand and craft beer without the alcohol. They are much more interested in health and wellbeing and are constantly seeking new and alternative brands, as well as ethical and vegan producers.

My most famous customer to date is probably the singer Lucy Spraggan, a former X Factor contestant. She has been sober for a couple of years now and picked up a can of my beer in a shop in Brighton, which she really liked. She put it on her Instagram with over 150K followers and that helped boost sales. It’s encouraging seeing more quality AF beer brands in mainstream supermarkets, as this helps normalise sober beer drinking. A couple of years ago Beck’s Blue was the only AF beer option. Now there’s a growing number of small and large brewery AF options and various beer styles, increasing both choice and awareness.

How does the lack of alcohol affect flavour, how do you make a low / no taste good?

In my opinion, the lack of alcohol improves the flavour! As someone that hasn’t drunk higher ABV beers for over four years, a regular strength beer tastes overwhelmingly of ethanol to me. For those that drink regular strength beers, a no or low beer might seem to lack depth of flavour and body. This can be due to a shorter fermentation time but also because alcohol has a burning and warming effect on you, which is more noticeable in stronger ABV beers. The latest generation of no and low beers are reducing the gap in both flavour and body. Exactly like a regular beer, the taste varies due to the quality of ingredients used and method employed. Craft producers are experimenting more with bold hop and malt combinations to get the right balance.

Is there much difference in the ingredients or process between brewing low/no and a 3-5% beer?

There’s little to no difference in the main process, it only differs when deciding how to limit the alcohol content via either prevention or reduction. You can brew a full strength beer and then use one of a number of possible methods to remove the alcohol, such as reverse osmosis. Macro brewers would often heat full strength beer and evaporate the alcohol but
this also removes a lot of the flavour. Smaller craft brewers generally prevent the alcohol developing over 0.5% by using low fermenting yeast and stopping the fermentation process at the key point, using sterile filtering or pasteurisation. Some breweries have invested heavily in vacuum distillation machines to get their ABV further down to 0.0%. There are pros and cons to each method and each one has a different effect on the finished beer.
The ingredients are the same but sometimes lactose or maltodextrin is added to help with the body and mouthfeel, although this is not absolutely necessary.

Is the idea to make it taste as much like beer as possible, or should low/no be seen as a softdrink in a category all its own?

This question shows a lot of unconscious bias against low ABV beers, which is not uncommon when higher ABV beer drinkers talk about low ABV beers!
The product we make is beer and tastes like beer because it’s brewed in the same way. The fact it has a lower abv does not make it not beer. The key thing for us is that we are adding to people’s choices. The more high quality, low and no drinks available, the better. Low and no options are becoming normalised and this is good for lots of reasons.

The quality of no and low beers is increasing rapidly. I think many people’s experience of no and low drinks has been negative in years gone by, either through poor quality macro beers such as Beck’s Blue or Kaliber; or sugary drinks like J2O, but the scene has moved on and I encourage people to try some of the new craft low ABV beers coming on to the market and I’m sure you will be surprised at the difference and encouraged by the quality.

Where can people find your beers?

Local stockists include Kindly, Hisbe’s, Store Brighton, Bison Beer and Higgins of Hove. Also, we are Brighton based and keen to collab with local breweries to create low ABV beers, if you can help, please send a message via the contact form on our website.

Is there much technical difference in the process between brewing a 0.5% and a higher abv beer?

Broadly the issue is pH. Beer is ever so slightly acidic because it optimising the various biochemical reactions that occur during the brewing process as well as providing a slightly preferable environment for the yeast to flourish. Because water has a pH of 7 (netural) we have to pay closer attention to this to make sure we’re still getting the most out of our ingredients and that the finished product can still seem like a beer.

How does the lack of alcohol affect flavour, essentially how do you make a low / no taste good?

Generally speaking the stronger a beer is, in terms of ABV, the more flavour it’s able to carry. Because of the lower ABV and the limited fermentation time we have to consider what and how we can use our ingredients to maximise flavour. If I were to tell you any more I’d have to get you drunk so you don’t remember. Kind of a problem with the low/no.. (laughter)

Is the idea to make it taste as much like beer as possible, or should low/no be seen as a softdrink in a category all its own?

A bit of both. There are various reasons that people decide to drink low/no beers but they’re still brewed with the love and care that any other beer would be. With King Limbo, we try to keep the mouthfeel, balance between bitterness and sweetness and give it plenty of hop character, but we all know that it’s not going to taste the same as a 9% DIPA. It’s great to see variation of styles in low/no beers recently, but for us, you can’t beat the classics.

Give us your take on the low/no beer market?

The market is growing as these beers have improved dramatically and new generation of drinkers were not exposed to some of the dreadful beers of 30 years ago. Add into that, there is more choice of styles not just a lager which may not be to every ones tastes. While the market is less than 2% of beer in the UK it is growing and if it grows to match countries like Germany it may make it to 10%. Two of the Global brewers expect 20% of their sales to be no or low by 2025!

What are the challenges of brewing a low/no beer?

Lack of alcohol, lack of body and the detrimental effects of removing alcohol from beer can be difficult to overcome. We do not brew the alcohol in above 0.5%, and I cannot let all our trade secrets go, however you need to consider where the flavour components come from and just use those. When you try new and interesting methods in brewing you find new and interesting things to go wrong. So yes there are technical challenges to brewing 0.5% beer but we love a challenge and we learn from our mistakes and hence getting better all the time.

Tell us about your available low/no products?

We wanted to make a quaffable beer in a similar style to our existing beers so you could join in the round with your mates rather than nursing a small bottle of  beer you didn’t really want to drink all night. This meant using locally grown hops, which don’t have the powerful flavours of American hops, to hide any problems, and so this took some time to get right. Our Aztec Lager uses a novel ingredient to bring it to life and that took longer to develop. These are definitely beers, not flavoured soft drinks.

Where is the price point for low/no beers?

The only place we can control the price of our beers is in the brewery shop. Being a brewer I think the price for low/no alcohol beers should reflect the quality of their production.
Those that have expensive ingredients such as our Aztec, in which the agave is ten times the price of malt, plus it’s organic, and so the other materials are twice normal price, there is justification for its cost. Some beers undergo the expense of complicated de-alcoholisation.
I think we have learnt from the past that this style of beer is not easy to get right and like most commodities cheap beer tends to be exactly that.