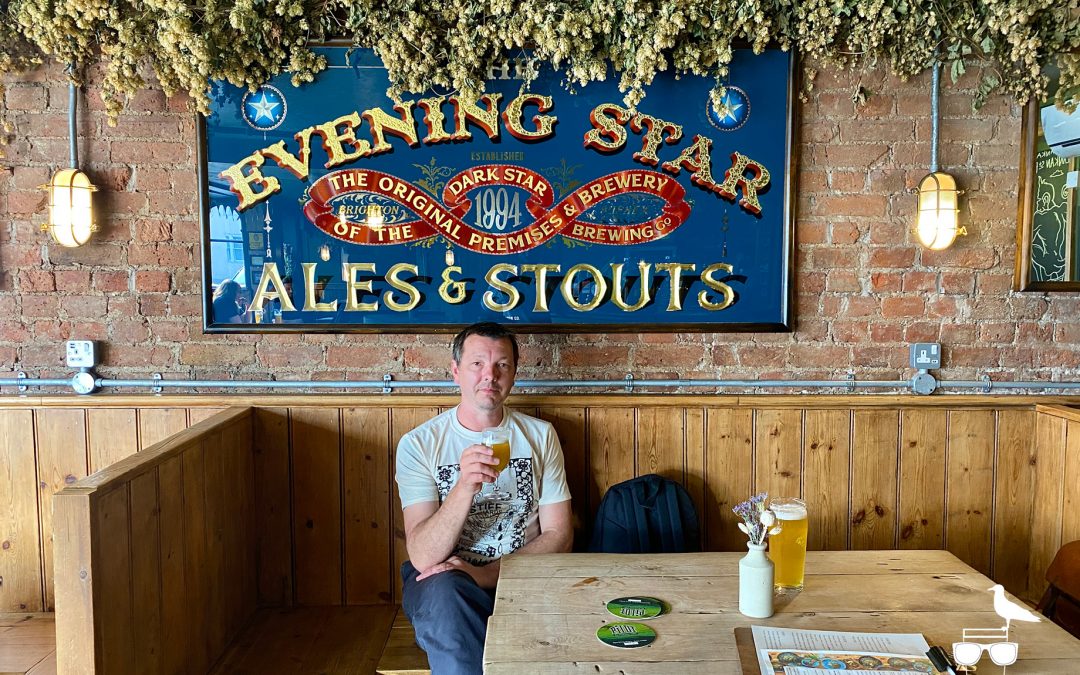 “And it’s only us realists who are gonna come through

‘Cause there’s only one power higher than that of truth

And that’s the burning sky”

We have a beer with legendary local brewer Mark Tranter of Burning Sky at the place where it all began, to learn how a chance encounter with a bottle of Orval spawned 2 of Sussex’ most renowned breweries 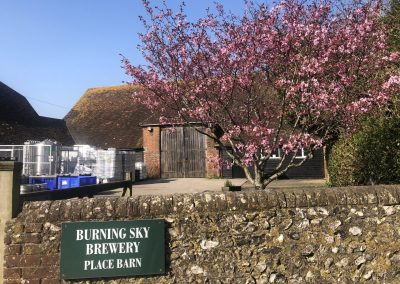 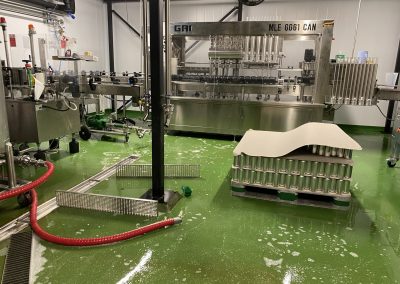 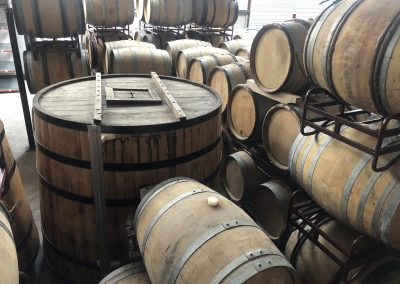 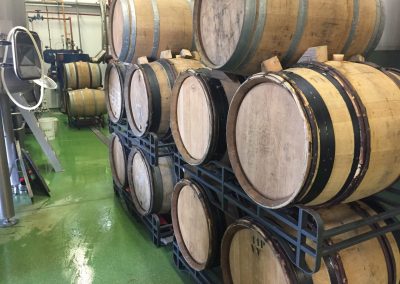 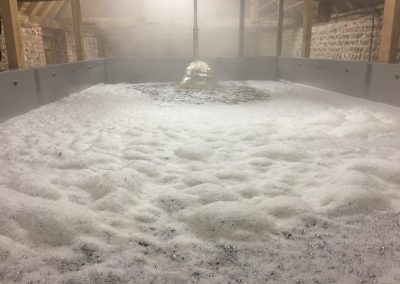 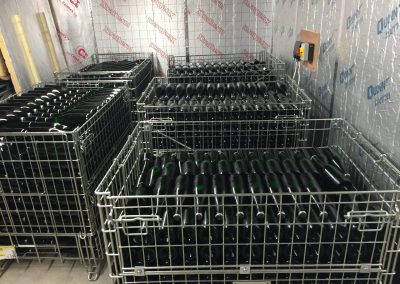 Most people will know a little about your history and beginnings at Dark Star, both in the cellar of the Evening Star and later at Partridge Green. Perhaps you could just sum up your time there by telling us about a biggest achievement and fondest memory you have from that whole time?

Blimey. Well we’re actually sat over what used to be the hatch to drop malt into the cellar to save us carrying tons of malt down the stairs. Anyone who knows the Evening Star knows it’s a tiny pub, and people might wonder where the brewery would have gone. The brewery had started in 1994, and I started here in 1996, it was tiny and was basically an extension of the pub cellar.

Well I was thinking we can swerve a whole history as you must have told this countless times. I’m just interested in a fondest memory or defining moment ?

So there’s 3 things. I think getting offered a job was like, one of the fondest memories (laughter) and meeting Rob and becoming friends with him and a colleague for a number of years.

Then brewing the first beer, going from home-brewery to seeing it poured commercially.

Then later, some of the beers that Rob and myself developed, they seemed quite avant-garde at the time, Hophead in 1998 and American Pale in 2001, and back then those beers were quite aggressive..

Bitterness and hop aroma-wise. Now palates have changed but back then it was big deal for me. It was proud moment, because when Dark Star sold after I left, it was basically those 2 beers that survived.

was there any commission for you then?

and I understand you left in order to be more creative and inventive with your brewing?

Do you remember the first ale you tried that got you into brewing?

What made me want to do home brewing was when I was a student in Wolverhampton doing a fine art degree, because it was cheap. (laughter) There was a place called New Market Inn and that used to have Sarah Hughes Ruby Mild on because that was brewed not far away. I grew up with a family of beer drinkers so had a lot of Wadworths and Hook Norton. So there wasn’t really one beer that made me want to brew.

Is there a beer that pushed you as a brewer, that you can look back at and say that was turning point?

Ok, so when Trafalgar Wines was open, back in the late 90s, buying Orval (Belgian Trappist ale) there in 95/96, wasn’t even sure what it was, but it made me understand that beer can be many things. It wasn’t just lager or bitter and in 95/96 there wasn’t that many beers available in the UK very easily. So yeah probably Orval. Back at that time there was no massive brewing scene in the UK, you couldn’t get US beers and you wouldn’t have heard of them if you could. So Belgian beers were as exciting as it got, and are really exciting still.

Can you give us a little background into the nascency of Burning Sky, how you financed the venture, chose the location, built the team etc.?

The brewery is on Firle Estate with a Lord of the Manor in the foothills of the South Downs. A beautiful place. I guess I wanted it to be there because it’s quite an inspiring place, and being on an industrial estate wasn’t really conducive to me. I remember driving around with the Estate Manager trying to find a building that would suit, and it’s been a good place to be for the last 8 1/2 years.

It was financed by cutting deals with people I knew. I had some shares in Dark Star so when I left I had to sell them so every penny I got out of that went into building the brewery. Then there were some other companies I’d worked with who could offer me payment terms rather than taking a loan, because I didn’t have any backers. So I had to sign my life away to people, but paid for it all quite quickly.

We started with fairly humble beginnings, but always buying good equipment. So the pumps we bought in 2013 are still working.

Team-wise, at the time, a mutual friend had introduced me to Tom Dobson At the time he was still at Dark Star. I got him to enter a homebrewing competition I was judging but he didn’t know that.

At this time there wasn’t loads of breweries floating around, so I thought it would be nice to give someone the chance I’d had a few years before, being employed on the basis of caring about what you do.

and did he win that competition you set?

Why the name Burning Sky?

I’m quite into my music, and I was feeling a bit burnt out by Dark Star at the time, all water under the bridge now. Basically it’s a song by The Jam and it’s written as an imaginary letter written between 2 friends and it kind of summed up how I felt about things and, I just wanted to do something a bit more personal.

I’ll have to really listen to that song and the lyrics now. With a Burning Sky beer in hand of course (laughter) in fact which of your beers would be best to drink to that song?

Oh I don’t know. Maybe for that one a Petit Saison.

What was the first beer you brewed at Firle, and why?

First beer brewed was Saison Provision, a mixed fermentation, barrel aged beer that wouldn’t then be ready for another 6 months, we quickly followed that up with a faster beer. But the reason for doing that beer was that it was so markedly different from anything I’d done before, and anything else anyone was doing in the UK at the time. So it was a statement about who we were and what our intents were.

Did people take to that direction quickly?

Yeah I think so. It was well received, but we were better known nationally than locally for maybe the first 2-3 years. In Brighton at the time people wanted craft beer from London and cask beer from Sussex, it wasn’t possible that Sussex could make craft beer.

That first Saison was a statement, but is that sprit of traditional methods and farmhouse flavours still what defines the brewery?

We’ve evolved a lot since then, but there’s always a heavy nod to the saison style beers of Belgium. It’s one of the things I’m fondest of, they were the beers that first blew my mind and you can travel round the world, even just sat in the pub, you might forget about someone you used to love a lot, and you come back and find that and it inspires you again.

I’ve travelled a lot with my friend Eddie Gadd at Ramsgate Brewery, we’ve been around Belgium countless times and invaded many breweries. It’s a style that knows no bounds.

Were you quite star struck when you visited the Orval brewery finally?

Erm.. it was a bit of a demystification. I guess you have this romantic vision of people making it at twilight (laughter) when it’s actually just a computer driven process. There attention to detail is incredible and the beer is still fantastic.

So you’ve developed a House yeast. What does that process involve? Why was it integral to Burning Sky?

This is just from Saisons and mixed fermentation. We got a saison yeast from a brewery in Belgium, but it’s not typically commercially available. We use that just as it is in our clean saisons such as the Rustic Table beer. For the mixed fermentation we have a brettanomyces strain and a lactobacillus strain. They were isolated from different beers but not from one beer.

Then there’s the Coolship which is spontaneous fermentation and is also unique. I’d never call our beers Lambics or Geuze because they are specific to that area of Belgium, but this is directly inspired by that method of brewing with a long slow fermentation.

So are you finished there or is there more yeast development to do at Burning Sky?

There’s always development but at the beginning I was a bit more of a kid in a sweet shop, saying we could use this yeast or that yeast. The thing I found over time was, the best thing you can do is work with what you’ve got rather than over complicate things. There’s so much to be learned from the tools you have rather than going and buying new ones. The yeast is the heart, so you don’t want to have a heart transplant every time you make a beer.

Whats the next exciting project / release from the brewery?

We did a remote recipe collaboration with my friend Kelly Ryan, who was one of the first brewers at Thornbridge but he’s been back in New Zealand since 2010. So we’ve made a fresh Grisette, which is like the French version of a low abv Saison. We’ve got a barrel aged, stronger, mixed fermentation version of that as well.

You’re almost conspicuous from the absence of a Burning Sky tap room in Sussex. Are there any plans or dreams for that? Would it be rural or in a nearby town?

Not imminently but never say never. It’s impossible to do it at our exact location because of immediate neighbours but given the last couple of years I’m not really in the mood to stress out with new ventures.

Given the change in industry since you launched? Would you do it all again in the current climate?

It would be easier to start it now to be perfectly honest, because beer and different styles of beer are so much more popular than 9 years ago. 9 years ago, you couldn’t by a large oak vat like a foeder for love nor money. Well I did, but it took a lot of investigation and to get people from the wine industry to talk to you. Now they’re all over it like a rash.

There are different challenges now, partly because there are so many breweries, but that challenge is also a positive because there is so much more acceptance of different beer and beer styles and a lot more enthusiasm for locally made beer now.

I would do it again, but probably slightly differently, and I’d focus on the same beer styles.

You already seem like a brewery with a heritage. What do you hope the legacy of burning sky will be?

Well if anyone remembers us it’ll be a miracle (laughter). I hope we’re remembered for quiet positivity. We do our own thing and make some well balanced, well conceived beers made for drinkers by drinkers.