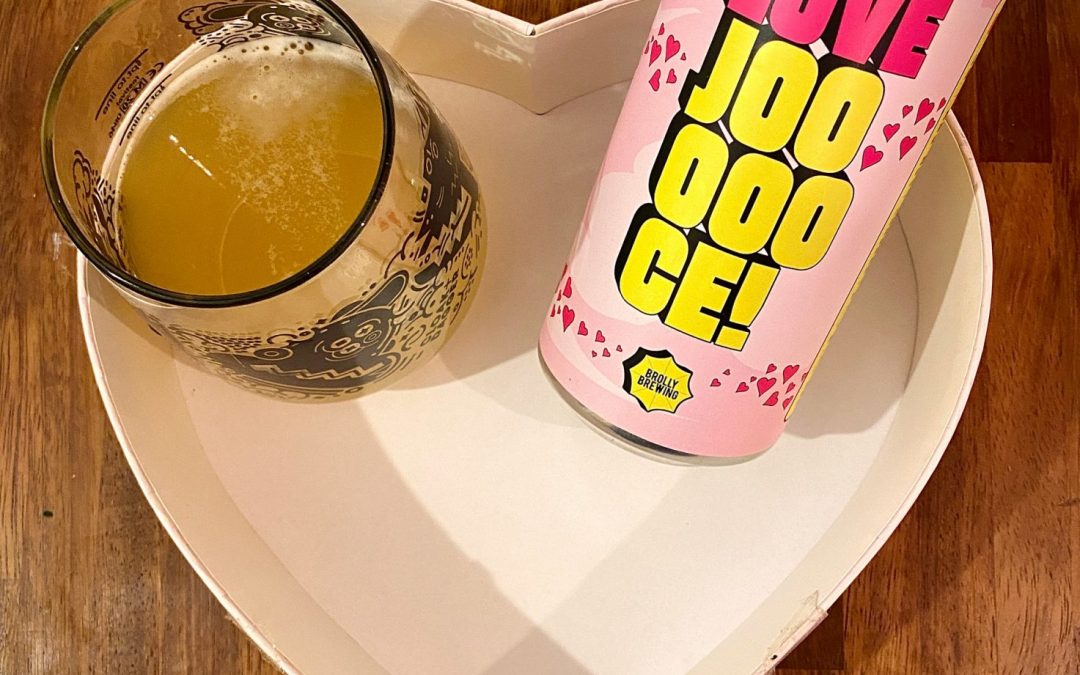 Brook Saunders, Director/Head Brewer got in touch to let us know that Brolly are also putting their wares into small pack now, kicking off a ‘hop bomb’  series with a mouth-watering 330ml Valentines Day NEIPA release, ‘Love Joooce’

So, grab a device for keeping liquid from falling on you, because it’s about to get wet!!! 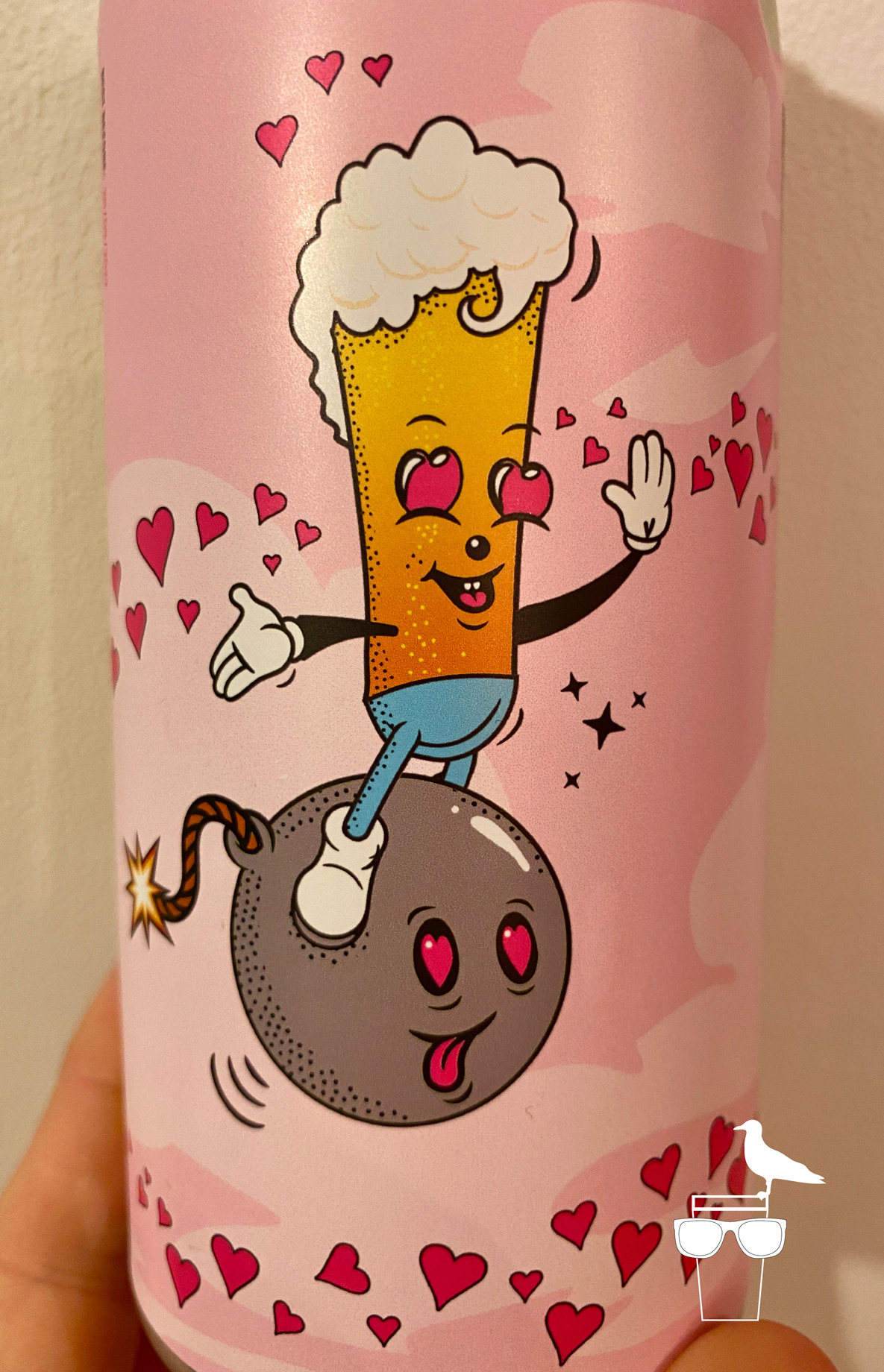 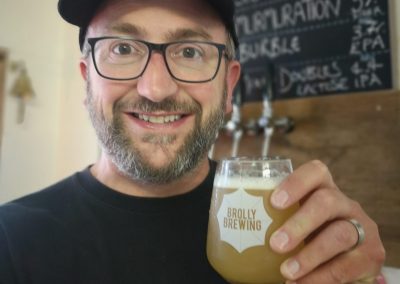 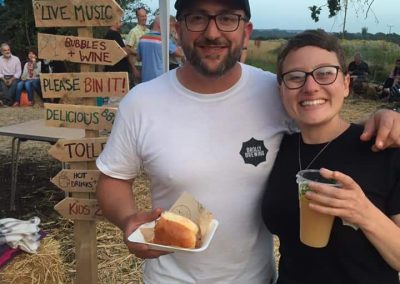 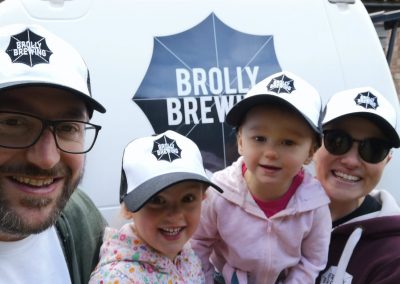 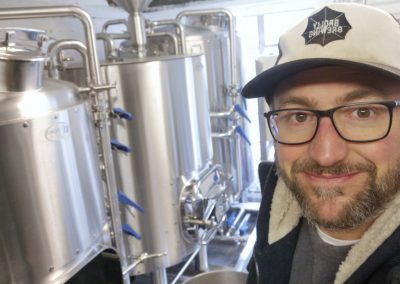 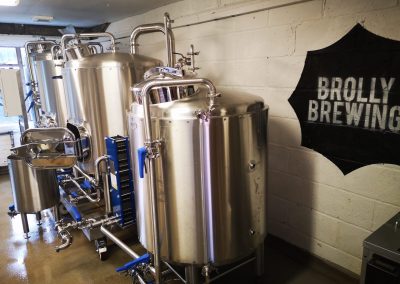 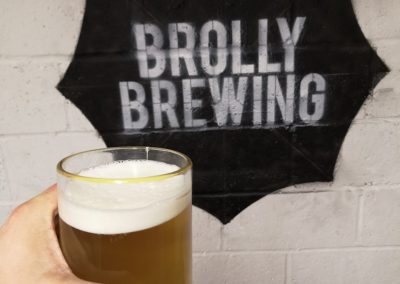 Give us a little background on Brolly Brewing for those who haven’t come across you yet.

I was homebrewing as often as possible and slowly ruining all our kitchen surfaces. So, Holly kicked me out the house to find a home for my brewing aspirations. Luckily some friends had a derelict chicken coop on a farm in Wisborough Green. I converted that into Brolly and began brewing on a used 1BBL Elite Stainless kit.

I was massively into hop-forward beers back then but knew that the local market was much more interested in brown, clear bitter. And that’s what I brewed Sat & Sun for about 3 months to generate some cashflow, pretty dull to be honest. I then brewed our first hazy-yellow beer called C.O.W. Citra Oats Wai-iti. Which was a huge success and for the next 2 years I produced hazy yellow cask beers alongside traditional styles.

Brolly seems like a couple enterprise. What does Holly do and is there anyone else involved in the business?

Holly does a huge amount for Brolly.  She runs everything outside of the brewing.  That’s marketing, logistics, events, webshop to name a few.  She is super-organised and it’s just the two of us running Brolly in our spare time.

What qualifies as a jooocy hop bomb to you guys?

For all the beer fans who aren’t geeky brewers (like me), What do you mean by a biotransformation hop, how is it different to other varieties and why is this integral to a juicy beer?

Yeast interacts with hops when the beer is fermenting.  Certain chemical compounds are (bio)transformed into others that can help sustain or increase hop aromas and flavour.  Certain yeasts and hops are better at this.

What have you got going on in this beer hop and yeast wise?

If this beer is the drink of love for 2022, what food (of love) should we pair it with?

This beer is a fruity little number. We’d say it pairs well with fish or perhaps even oysters to get the love juices flowing 😊

You’ve gone for a sessionable 4.8% for this beer and have kept a good body and creamy mouthfeel. Are you going to push into elevated or high levels of alcohol with future NEIPAS though and make something more thick and boozy?

Regardless of the ABV all our beers have good mouthfeel, we hate thin, insipid beer.  These days I’m not a fan of going beyond 6% in IPAs, they lose their balance as the booze takes over.  So we’ll push up to 6% for the next one, Mama Joooce (For Mother’s Day!).  For this we can maximise hops and mouthfeel for a big, juicy beer.

This is the first of a series so can you tell us about the future hop bombs have you’ve got coming up?

We’re doing a series across the year as we begin canning on site for the first time. Love Joooce is an easy drinking start to the season. We’ll try to turn things up a notch as we get to grips with our canning process. While writing this we still haven’t canned Love Joooce.
It’ll be our first attempt to can a hoppy beer and that comes with many difficulties. I think we should be fine and when we 100% know our cans are of the highest quality, I’ll start work on the next recipe.

and as we’re talking about love, what beer do you love currently and why?

That’s like choosing between your kids but I have a huge soft spot for our recently canned Coco De Moo 7 % ABV Pastry Porter. I hate man-made flavourings in beer so this is made with kilos of roasted cocoa nibs and roasted flaked coconut, nothing artificial. Another beer would be Takk by Little Monster, I’ve always loved this table beer. At this time of year, when I’m trying to be a little better after Xmas, it’s the perfect beer.

You mention you like natural ingredients and flavourings. What’s your favourite adjunct and why?

To be honest, where possible, we’ll avoid using anything but four ingredients; water, malt, hops & yeast.  We’ll rarely use much else but our Pastry Stout was an exception.  This was initially a Triple Black IPA but I didn’t pitch enough yeast and the beer finished too sweet.  To save the beer I threw in a load of roasted cocoa nibs and coconut.  Thankfully, it turned out rather well.

This year for our 200th brew I tried to repeat the mistake and it worked!  In fact, this beer got treated a little better than the original and it shows in the end result which we canned recently.

The last year or 2 has been crap for most people. How is the brewery doing post covid?

When the lockdown hit we were producing 80% cask and 20% keg. With all the pubs closed, a mountain of cask beer and being furloughed from my job, we decided to launch our Brolly Beer Truck delivery service. Delivering 3.3pot glass growlers around our locality. I’d collect them on Thursday morning, fill them at 3am the next day and deliver them by 8pm. Along with a COVID grant, it made us enough money to buy our own 2.5BBL kit and some uni-tanks. We now produce about 50% keg 50% cask. At one point during the lockdown we were 100% keg.

Since we’ve come out of lockdown it’s been pretty tough. We have a taproom that overlooks the South Downs and last year we couldn’t get folks into the field to park as it was sodden. This meant we were closed most weekends and we lost money. So, this year, we’re sorting the entrance out and we’ll have fresh beer, food trucks and great views every Sat 1pm to 8pm from May to Sept.

What big events do you have coming up this year at the taproom?

We’ve got Brollyfest which is on August 13th.  It’s our annual festival with live music, Brolly beer, food trucks and kids entertainment.  Folks can camp overnight too.  Tickets are on sale soon.

The more pressing event we have is our Brolly Pop-up Music sessions which is happening on Saturday the 26th Feb in central Horsham.  We’re raising money for a couple of local musicians who are really talented.  The pandemic has hit everyone so hard but none more than The Arts.  These guys are playing live for both sessions and we’re giving them the door fee which is £5 per person.
Tickets are purchased via our website or available on the door if we don’t sell out.  I’ve also brewed a beer dedicated to one of their original songs called “LifeLine” which is a Dark Mild using beech smoked malt & hopped with Sabro.